We’ve been infected with far too many instances of, ‘What the hell is wrong with America?’ lately. The Internet keeps delivering these viral-video gut punches to remind us all of society’s broken layers.

This week, we saw a Texas police officer who showed up to a teenage pool party — necessary to disperse a trespassing group or not — and immediately made the situation 1,000 times worse when he went on a violent rampage.

The other video was of a two women who started throwing blows at a Walmart while a little boy, a son of one of the women, jumped into the fight. This video captured in Indiana is far more depressing than it is entertaining, something of which at least 62% of people agree. (The other 38% make up the hyena pack of snark that litters the Internet and perpetuates this type of violence.)

But these viral trash bags of our culture do have one thing in common: they are bringing to light some of the ills that haunt our society. Without a camera, that Texas police officer never would have resigned. And even that ugly scene at Walmart has surfaced the effects of awful parenting that makes young kids into future violent adults.

It’s all instant proof, even if context is needed to fully understand each situation. We are now being given further insight into the types of people or systems that destroy America.

Other than being just click-baity entertainment, these viral videos could ultimately improve America’s culture. You can agree or disagree with that Staance here. 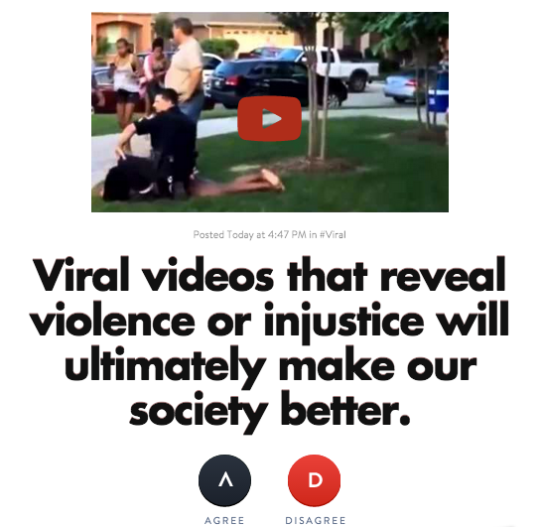