Let’s hold off on giving this Baltimore mother the “Mom of the Year” award, ok?

Here’s the video that’s gone viral, the one of a mom hitting her son and forcibly removing him from taking part in the current Baltimore protests:

This moment, caught on live TV should not be celebrated. It’s not heroic to beat anyone into making better decisions, especially when it’s your child. While her action is certainly better than inaction, it’s still a miserable display of violence to fight violence … which is occurring as a response to police violence that took the life of Freddie Gray. 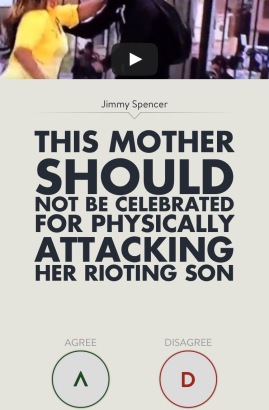 The mother’s strong effort to keep her son from protesting is right on, but the way she did it was not right. Violence does not help solve violence. Watching that attack on her son brings the realization this probably wasn’t the first time she hit him. You can even speculate that being raised in a household with violent correction like this might be the reason he’s ready to take part in rioting.

Obviously this brings forth a larger issue of whether or not it’s OK for someone to physically discipline his or her child, of which 74% of people agree it is OK. So maybe for most, this conversation ends where that one ends.

There may be many reasons why this mother was forced to take such dramatic, impulsive action against her son. My gripe is less with the mom — as none of us can speculate on her unique situation — but I do have a problem with America applauding this video. I am against all types of violence. We cannot condone and praise this mother while condemning domestic abusers like Adrian Peterson. (That may not be a fair comparison, but it’s no wonder the line is blurred for many.)

At the time this blog was posted, 77% of Americans said this mother should be applauded for rebuking her son.  At the same time though, 83% agree violence attracts violence. There’s an obvious contradiction here.

So while much of the country revels in this mom-on-son beat down, step back and see what actually being celebrated: just another exhibition of a violent culture. 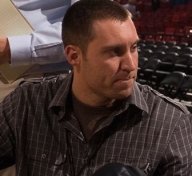 Tell me what you think and take a Staance here. Leave an opinion and see if others agree or disagree with you.

You can find me on Staance here and on Twitter @JimmySpencerNBA.